attending to the shadow of living and learning on the web

The psychology behind how we behave online

“Belief more than ever, we just invented something absolutely breathtaking. Beliefs, in order to function to operate, have to be first person beliefs.  We can literally believe through others. You know you know the formula of parents, we are atheists but not to disappoint our children we pretend to believe. You know, the Santa Claus story . You ask a parent do you believe in Santa Claus? Are you stupid? Of course not. I buy the presents, but I pretend it for my children. You ask the children. Do you believe? They say, no. We pretended not to disappoint our parents. What is my point here? You have a belief which is nobody’s belief, nobody believes it in the first person. Yet it fully functions as social belief. Here you did a mega contribution. By ‘you’ I mean the United States. You here in Hollywood. Your greatest contribution to 20th century world culture I would claim, I’m sorry my old joke, is canned laughter.  Are you aware what a strange phenomenon this is? You return in the evening home, you open up stupid show like Friends or Cheers, and you are too tired to laugh. You just look. And the TV set laughs for you! It works, at least with me. Afterwards I feel relieved as if I was laughing! So much about primitive people! We have traditional examples of this, the Buddhist prayer where you write  the prayer you put it there and turn the wheel. You can think about pornography or whatever, but in reality you are praying. We are same! This is canned laughter. And I claim that beliefs function in a strictly homologous way. What we need is not belief in the first person. We need to believe that there is someone who believes; even if that someone is purely hypothetical.  An example; Roberto Benigni’s film, I don’t like it, ‘La vita e bella’ or ‘Life is beautiful’. You know the story father and son are taken to Auschwitz. Father, in order  to protect son from the trauma, tells him a bullshit story. That this is not really prison it is just a big competition site where you we can leave whenever we want. But if you remain to the end there will be a big price and so on and so on. What would have been a way to make it a much better  and desperate film? That the father were to discover at the very end, when he is to be shot, that the son knew all the time. He  just he pretended to believe his father so as to protect him. This would be the proper Christian reversal as it were. The actual movie is not strong enough. ” Slavoj Zizek

An open ethics review panel for independent researchers: Where do I sign up?

A response to David who asks: “How could we move on, how could we build…”

I have had that feeling of deja vu for a while, it started after the honeymoon period of being in the open was over.

Initially I liked the ‘free for all, no rules’ ethos as I compared it to doing research in an institution. Then, the many years of academic training kicked in and I started to see the underbelly of it all.

This sense of deja vu came over me as I read dodgy methodologies and outputs being used as evidence for ‘how learning is for all’ and ‘how the university will be (has been?) replaced by the MOOC or its latest incarnation’. I am less optimistic than you and feel quite helpless at the ignorance I see touted as ‘good’ research out there….yet…

END_OF_DOCUMENT_TOKEN_TO_BE_REPLACED

Predicting badly or why we need an external observer

Thanks for this, Jaap. Groupthink is more than a danger in this type of group.

I was put to mind of Heli Nurmi’s excellent engagement with her experiences with this kind of group (It is worth reading the comments) and of course the interesting article that Jenny and Frances wrote which gathered data of the impact on people of ‘the tension between openness and cohesion’ that Daniel talks about.

END_OF_DOCUMENT_TOKEN_TO_BE_REPLACED

‘I see mostly preaching and I am worried’

This is a response to Heli’s deep and honest reflections about open online learning.

I titled the post with a quote from Heli in the comments to her post as it resonated with some of the concerns I have been experiencing recently. I was deeply touched by the post and how in listening to a book review of a book about one topic new frames of learning opened for her.

END_OF_DOCUMENT_TOKEN_TO_BE_REPLACED 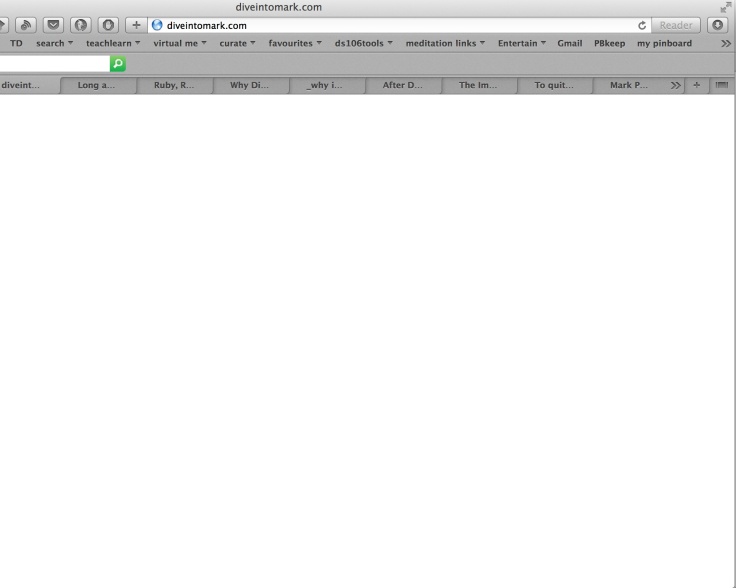 The presence of absence. How do we get to choose to leave online life and leave behind a clean screen if not a clean slate? Jenny Mackness has been writing about absence as an essential element of presence from many interesting perspectives – art and metaphor, for example. I am also interested in silence as part of dialogue, disconnection as part of connection. It is so easy to forget the background in favour of the foreground of the moment.

“As we bring to the foreground new structures, we focus on them to understand them or destroy them…as we assimilate the new structure without sight of the whole but just those aspects that attract or repel us it becomes ‘normal’. What was figure becomes the ground, the way things are around here. New figures come to the fore including the seeing of the old as obsolete and to be shedded. What can our actions be in that interface of figure and ground almost instant and certainly not stable shapeshifting?” McLuhan

This post seeks to bring to the foreground resonances I found when reading Jenny’s posts.